Reflections on Rio 2016: Can the Olympic Games make do without a Cultural Olympiad?

…
Rio has been the first summer Olympic host city since Barcelona 1992 not to host a four-year Cultural Olympiad. But has anyone noticed?

The Cultural Olympiad, or official Games cultural programme, is probably the less valued dimension of the Games. Despite its 104-year history, organisers have struggled to fund it, the media have been reluctant to cover it and the general public has generally ignored it. Despite this, as well known by connoisseurs of the art world in places as diverse as LA, Sydney, Torino or London, much has been achieved by artists and cultural entrepreneurs in past Games and after 2016, in the wake of the ambitious Agenda 2020 (a roadmap to the future of the Olympic Movement under the auspices of the International Olympic Committee) much more is expected from art and cultural interventions during and between Games editions.

Rio 2016 proposed to focus its cultural programming efforts on the one-year-to-go countdown to the Games and the months leading to and following on from them. Its programme, Celebra, was to achieve this via pop-ups, flash-mobs and micro-festivals. However, the dramatic cuts to Brazil’s culture budgets nationwide by interim president Michel Temer had a direct impact on the already vulnerable Celebra team. Unlike other culture-related Games programmes, such as the high profile opening and closing Ceremonies or the torch relay, the Cultural Olympiad has never counted on a protected budget and its operational framework and deliverables are not defined within the Olympic host city contract. In Rio, this led to the programme being sidelined, with cultural activity during the Olympic fortnight led instead by separate bodies operating outside the organising committee, under no common umbrella.

So what have we got and what have we missed when it comes to art and culture at the Rio 2016 Olympics? From a new hashtag (#olympicArt) to giant versions of absent competitors; from record-breaking graffiti murals to short ‘palm stories’; from online Vines to Olympic art posters and over seven thousand portraits of Games participants taking over Olympic sites across the city … these are some examples of leading artist interventions motivated by the Games – though not always recognised or known as such. 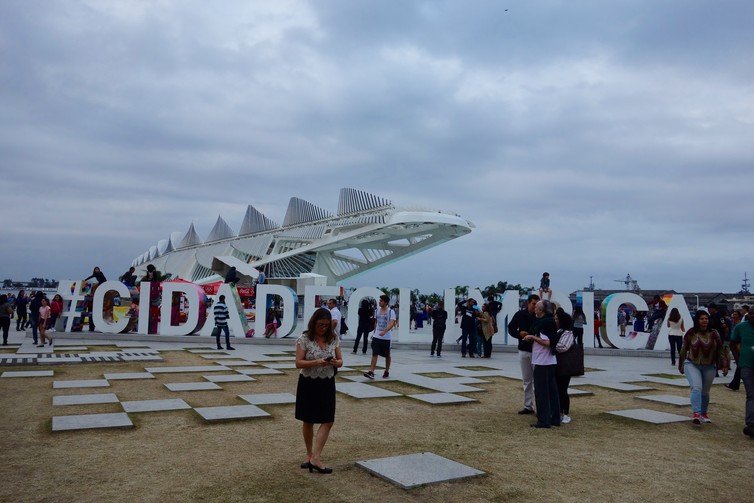 …
From Rio residents’ perspective, the main bulk of cultural programming has been delivered through a series of Olimpic Boulevards, the largest of which, at the newly regenerated Porto Maravilhas, is set to become the main urban cultural legacy of the Games. Rio’s Boulevards have taken on the tradition of hosting ‘Live Sites’ (large screens in the open air to broadcast sports for non-ticket holders) but extended it so that they also incorporate cultural manifestations, street art and, in the case of Porto Maravilhas, link up to brand new (and quickly becoming ‘iconic’) cultural institutions for the city: a museum dedicated to ‘tomorrow’ by starchitect Santiago Calatrava (the Museo do Amanha) and a new art museum with some of the best views in the city (the Museo de Arte de Rio). The Museums have been oversubscribed throughout the Games, while up to four million people (according to the city’s tourism department) packed Porto Maravilhas over the Olympic fortnight. Monumental high-concept graffiti covering previously derelict warehouses is also contributing to the attractiveness of an area that a year ago was considered no-go, dangerous and abandoned.

At the other end of the spectrum, international media have been keen to cover the work of French artist JR, appointed by the International Olympic Committee as part of its first Artists in Residence programme. His three ‘Giants’ have popped up on top of buildings and emerged out of the water as an homage to those athletes that could not make it to the Games but deserve to be noticed. The challenge, however, has been to communicate the existence of the Giants and to get them spontanously seen by large crowds, given that it has not been possible to locate them in core Olympic or city centre sites. In contrast, InsideOut, another JR intervention developed across the world since 2011, has worked wonders in the Olympic city and resulted in thousands of oversized portraits of volunteers, athletes, officials, venue workers and members of the general public covering the walls of the Maracana Stadium, the Olympic Village and the Boulevard Olimpico. 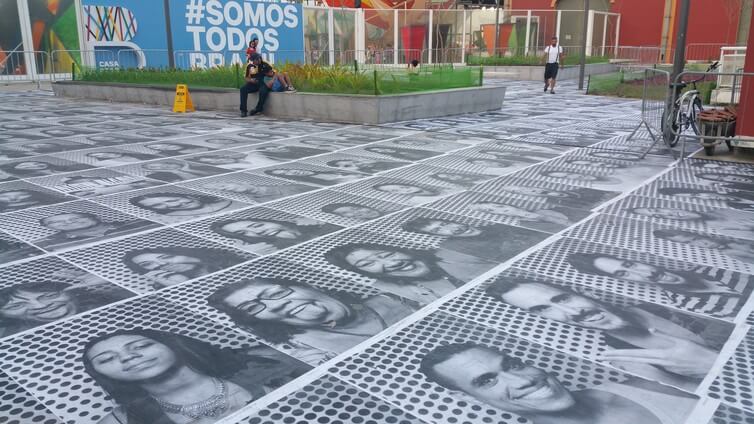 …
An emerging American Vine artist and an established German writer are the two other artists in residence for the Rio 2016 Games. This is unprecedented given that, for the best part of the last 30 years – ever since the establishment of a global Olympic marketing framework that has secured some of the most lucrative media and sponsorship right holding contracts in history – offering platforms for artists and cultural institutions to intervene at Games time had become a challenge. Branding conflicts, disagreement over how the term ‘Olympic’ can be used and long established suspicions from the arts world against the Olympics as a route to artistic quality and freedom have meant that few truly successful Olympic and art collaborations have taken place. In Rio, the Artists in Residence experiment has been considered a success despite low levels of recognition amongst Olympic fans and residents, and the slow takeup of the proposed hashtag, #OlympicArt, in social media terms. This is because, as a minimum, an expectation is being raised that art has a role to play at the Olympics; and response from the arts world itself, as well as those mainstream media that noticed, has been positive so far.

In the aftermath of the games, after a well received closing ceremony that did not shy away from high art concepts, the overall feeling for Cariocas is one of achievement. Now, the baton has been handed over to Tokyo, a city that has been making strong cultural statements since its bid stage and throughout its time in Rio. These include a Japan House dedicated to showcasing Japanese culture, a Tokyo House focusing on contemporary art manifestations, and the presentation of public artwork by sculptor Mariko Mori as a bridge between Olympic cities. Tokyo 2020 will be the first city to fully enact the IOC’s Agenda 2020 recommendations and, having launched its official arts programme in October 2016, seems determined to push the Cultural Olympiad back to centre stage.

The Rio 2016 organisers have shown that it is possible to celebrate and showcase their city without a formal Olympic Cultural programme. But this has also meant that many of the inspiring interventions taking place have been missed by a majority of residents and have failed to connect with as many communities as they could have. If Tokyo is ready to put strategic thinking as well as resources behind its cultural programme, now that the IOC is equally keen to contribute and push for a more ambitious artist-led agenda, this may be the time to finally put #OlympicArt on the map, prove the sceptics wrong (regarding the capacity for quality and independence from boosterist narratives) and, in turn, renew and advance some of the more tired, perhaps effective but not necessarily creative and culturally unique aspects of the Games staging process. The latter includes the Look of the Games programme, which saw its heyday back in the 1960s and 1970s, right before global Olympic marketing rules, international consultancy and corporate priorities took over operational as well as aesthetic narratives for the Games, in turn forcing avant-garde artistic interventions out to the sidelines.

1964 was the year of the previous Tokyo Games, which, similarly to Mexico 1968, remain a referent for avant-garde Olympic graphic design. It is thus fitting that Tokyo 2020 retakes the thread and brings back art and culture to the core of the Games delivery process. Rio has proven uniquely capable of throwing a big party, despite endless political, economic and environmental challenges, but sustainable creative legacies also require strategic, ambitious and consistently promoted cultural programming. Despite under-appreciation of this programme to date, the Olympic Games cannot be fully successful and ensure strong and distinct cultural legacies without an equally ambitious Cultural Olympiad. It is time for this programme to regain its protagonism and operate not only behind the scenes, but upfront as a core and deserving Games ambition.